If you could write a subtitle for the book of Genesis, what would it be? My entry would be Genesis: Oh, Brother! That’s because brothers, and the fraught relationships between them, are the beams upon which the structure of this book is built. Cain and Abel, Ishmael and Isaac, Esau and Jacob, and of course his twelve sons—brothers dominate the sacred history of Israel. Cain’s pathetic question,השומר אחי אנכי “Am I my brother’s keeper?” is arguably the set-up for all that follows in Genesis, and even the Torah. What does it mean to be a brother? A family? A covenanted nation? There is a lot to learn, and the Torah is eager to teach us. Genesis will close with Joseph making his brothers swear to become his שומרים, the guardians of his body (in later Jewish parlance, anyway). In doing so, they will show repentance not only for their prior offense against Joseph, but for all of the instances of fraternal treachery in this book.

Parashat VaYishlah certainly features brothers—five chapters (28-32) and twenty years separate Esau’s threat to kill Jacob from his dramatic and weepy hug of his younger brother. During the interim they have both grown independent, but no one expects that the old tensions have been forgotten. Soon after their fraught embrace, Jacob and Esau join together to bury Isaac (35:28), but just a few verses later we learn that Esau will depart Canaan for “another land because of his brother Jacob.” Modern scholars have long noticed the Bible’s trope of younger brothers supplanting their elders, and understood this to be a projection of national history. Israel too was a younger, weaker and smaller nation than those that surrounded it to the east and west; yet as God’s beloved child, it could presume to greatness and even hegemony, just as Isaac and Jacob (and Moses, and David etc.) would dominate their older brothers.

Brothers are important in Genesis, but what about the girls? Women of course appear in many roles—as daughters, mothers and wives—but what of their role as sisters? Genesis doesn’t give us a great deal to work with—some scholars have seen the Rachel/Leah rivalry as a mere reflection of Jacob vs. Esau. Indeed, the famous midrash that Leah’s eyes were רכות“weak” from crying over her feared match with Esau (b. Bava Batra 123a), would support this argument. 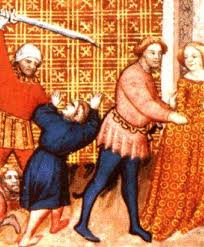 However, recent scholars have reread the Bible’s women, and found much more substance to their relationships. I am lucky to have gotten a sneak pre-publication peek at Rabbi/Dr. Amy Kalmanofsky’s new book, Dangerous Sisters of the Hebrew Bible (Fortress Press, Jan. 2014). Rabbi Kalmanofsky teaches us about two types of sister narratives—that of the ideal sister, who reinforces the patriarchy of her natal household, and that of the dangerous sister, who destabilizes it. Rebecca plays the role of the ideal sister, waiting for Laban to arrange her marriage, and readily acceding to it. Her union with Isaac reinforces the family’s unity. Rebecca’s sexuality and fertility are entirely at the service of her natal family. Miriam, when we first meet her in Exodus 2, is likewise an ideal sister. She protects her brother Moses, and thus aids in the success of her birth family. Later, in Numbers 12, she will play a more independent and challenging role vis a vis her lead brother, and for this “dangerous sister” behavior, she will be punished.

Rachel and Leah, as we saw last week, are rival sisters. Each has something that the other desires. Rachel has Jacob’s affection; Leah has fertility. No doubt their rivalry was painful to the sisters, but as Rabbi Kalmanofsky shows, it seems to have been designed as a healthy competition for the purpose of maximizing the birth of sons and the establishment of a covenanted nation of Israel. Initially, Rachel and Leah are ideal sisters, obeying their father and participating in his scheme to dominate Jacob and enrich his family through the marriage. (I think of this as the “binding of Jacob” story). But then Leah and Rachel join their husband’s rebellion and abandon their father and brothers, taking with them much of the family wealth (and idols). They thus deprive their natal home of its strength. The rival sisters Rachel and Leah, previously ideal, have become dangerous. Leah basically disappears as a character after the departure, and Rachel seems to suffer for her independence, bearing a “son of my affliction,” and not even getting to make her name choice stick.

The greatest example of a dangerous sister, however, is Dina. She leaves the safety of her father’s camp with an independent agenda—“to see the girls of the land.” Amy Kalmanofsky talks also about sisterhoods—sororities of women who establish a mutually supportive and independent communal structure. As such they are inherently dangerous to the patriarchy. Dina is certainly no exception. She goes looking (לִרְאוֹת) for female friends, but instead of finding them, she is looked at (וַיַּרְא אֹתָהּ) by Shekhem, abducted and raped.

This is a tragedy first and foremost for Dina, and the Torah acknowledges her suffering, but it also highlights the danger that Dina’s misfortune has brought upon her family. Her connection to Shekhem is destabilizing to her natal household. Her father Jacob is paralyzed, unable to define a course for his family, and her brothers are outraged by this appropriation of their sister’s sexuality. Rabbi Kalmanofsky writes, “Dinah’s independence as well as her desire for female companionship mark her as a dangerous sister and, as we see later, mark the daughters of the land as a dangerous sisterhood. In the narrative’s patriarchal ideology, the dangerous sister gets what she deserves for independently leaving the protection of her natal home.”

Dina is restored to her home, “safe” again as a now passive and chastened sister, but the fall-out of her misadventure reverberates for decades to come. Kalmanofsky concludes, “Although Dinah returns tamed to her natal home, irrevocable damage has been done to her and to Jacob’s household due to Simeon and Levi’s vigilante slaughter of the Hivites as Jacob’s reproach to his sons reveals: “You have brought trouble on me, making me odious among the inhabitants of the land.” At the end of Genesis 34, Jacob’s house is vulnerable. Although Jacob blames his sons for the state of his household, his sons blame their sister. They did what they had to do. Whatever the consequent damage to their household, they could not allow their sister to be treated like a whore.”

We won’t hear much more about sisters in Genesis, but by now we have learned of the promise and the peril that they pose for their families. The book of Genesis tells us the stories of individuals with pathos and nuance, but ultimately, it is not interested in the fate of individuals, female or male. It is the development of a brit am, a covenanted people, that interests our Torah. From an anthropological perspective, this makes perfect sense. A religion and an entire culture are designed to further basically biological goals—the propagation of a special family that has been chosen for its unique spiritual adaptations by the creator. Individuals are necessary but they are not the ultimate point.

Read this way, Parashat VaYishlah is not exactly the stirring tale of a heroic patriarch wrestling with angels and pursuing his own destiny. Rather, it is a richly patterned tale of family, tribe, and ultimately nation. In its beauty and in its horror, it bears a necessary lesson that we American Jews are not particularly eager to hear. The Jewish story is not about you and me, at least not about us as individuals. We can be smart or stupid, saintly or sinful, but in the end, the Jewish story is not about individuals, no matter how famous they may be in their generation. The Jewish story is about the creation of a larger structure—a group that will band together, generation after generation, in the service of holiness, and in devotion to God. Despite the many millennia that have passed, and the radically different culture in which we live, this essential goal of the Torah remains compelling to me, and remains a worthy mission for a career in religious leadership.