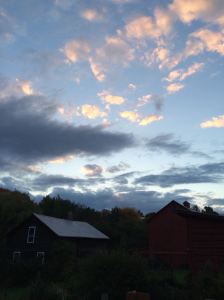 What became of laughter in the home of our first family? Abraham fell down laughing when he got the news that he and Sarah would finally have a child. Sarah too greeted the annunciation with laughter (it never feels fair that only Sarah was criticized for laughing). Even at an advanced age, and after a very long wait, Abraham and Sarah knew how to laugh. The happiest line of the portion is 21:6, “then Sarah said, “God has brought me laughter; everyone who hears will laugh with me.” (NJPS). Laughter until now indicates surprise, relief and ultimately delight. But laughter isn’t always a positive sign, and in this portion the same root will assume darker resonances.

Isaac, whose name of course means “he shall laugh,” will be caught laughing twice—once with his brother, and once with his wife, but in these instances the intensive “piel” form מצחק is used, and from the context, it appears to be more bawdy, like “making sport” or “fooling around.” Indeed, the sons-in-law of Lot react to his warning of destruction in Sodom as מצחק, perhaps also, “fooling around.”

Laughter in these stories evolves from a surprised response to good news into a socially inappropriate attitude which leads to tension and conflict. Levity has been lost in our portion, and laughter has become a marker of dark moods and a prelude to violence.

Intimacy is another casualty in our portion. It opens with the wholesome scene of Abraham and Sarah at home in their tent. By the end, Abraham is off on Mt Moriah with Isaac. Sarah is abandoned, apparently to her death, since we won’t again hear of her seeing her husband and beloved son. Indeed, when Sarah dies, Abraham has to “come to eulogize Sarah and to weep for her.” Where was he? Abraham attends to his wife in death, but where was he when she was still alive? That leaves just father and son, but we won’t again see them together, certainly not talking. It’s really the same pattern. Abraham will arrange matters for Isaac, sending his servant to procure the boy a wife, and later he will deed all he owns to Isaac. But will the two of them talk? Embrace? Show love? The Torah doesn’t tell us, but it doesn’t look good.

Intimacy is likewise lost in the other great relationship, that between Abraham and God. In the beginning they are very close. God pays a pastoral visit to Abraham, and considers the patriarch’s feelings and insights in the matter of Sodom and Gomorrah. Abraham stands “in the presence of God” as late as 19:27, but after he sees that the cities were destroyed, the conversation with God is done. God will command, and Abraham will comply, but from now on, he will see God from a distance (my drash on the expression וַיַּרְא אֶת הַמָּקוֹם מֵרָחֹק).

Where does it all go wrong? What happened to laughter, to intimacy between people and with God? On the human level, intimacy is destroyed by jealousy. When Sarah drives out Hagar and Ishmael, love and laughter depart from her own home and marriage. As for God, when Abraham’s pleas for Sodom and Gomorrah prove insufficient, when Abraham sees smoke rising from the plains below, the intimacy that existed between him and God is gone. The pathos of these stories is the decline in confidence. The characters stop laughing in joy; laughter becomes a cackle. The leading actor, Abraham, stops talking and arguing with God. Now he follows orders and steels his heart from attachment and love.

There are other ways to read this story, but these threads that I have lifted up are indicative of a family in shock. The conduct of the core three figures looks almost like PTSD. And this brings me to Veterans Day. I listened to a short story the other day on the “The Moth”’s special show for Veterans Day 2014.  Scotti Mike tells his story in, “A Sort of Homecoming.” At the beginning, he is a patriotic warrior, filled with confidence that he can make a difference in the world, reduce violence and allow a shattered society to become whole again. Far from succeeding, he discovers that he and his surviving comrades in arms are themselves shattered, filled with anger and despair over what they experienced, what they lost, and what purpose remained in life.

As we rest this Shabbat, let’s remember the severe price that has been paid for our covenant as Jews, and for our freedom in America (and in Israel and other countries where we live). Healthy and happy people have given up health, tranquility and also joy so that others could live whole lives. Abraham was one such warrior. Until his last days he remained loyal and responsible for others. Yet something got broken in Abraham, and in his relationships with his family and his God.

This dynamic makes me feel more responsible, not to go off and fight, but to find those people who have been wounded within while trying to help others, and to show them our respect, our faithfulness, and our love.